According to the information obtained from the blog of emilcar, Granada, the Andalusian province could have a physical Apple store, the so-called Apple Store that exist throughout the world. With a store in the city, the inhabitants, including myself, would not have to travel to other Spanish provinces to enjoy the services offered by one of the Cupertino company's stores. For nowit is a rumor, based on the leak of a series of plans about the distribution of premises in a large shopping center under construction, by the Twitter user @jomagao that transferred this information to the aforementioned blog about Apple.

It would be located in the Nevada Shopping Center in the municipality of Armilla, bordering the capital of Granada, under construction for several years after various urban controversies over the appropriation of undeveloped land. Till the date it is not known yet when it will be finished the shopping center, since a series of permits are still missing to carry it out and thus proceed for the firms to begin to adapt their premises. Curiously, and to further stir up the rumors, the Nevada Shopping Centerbelongs to Tomás Olivo, the same promoter of the Shopping Center the glen, located at Marbella, which already has an Apple Store, the closest so far for the people of Granada. 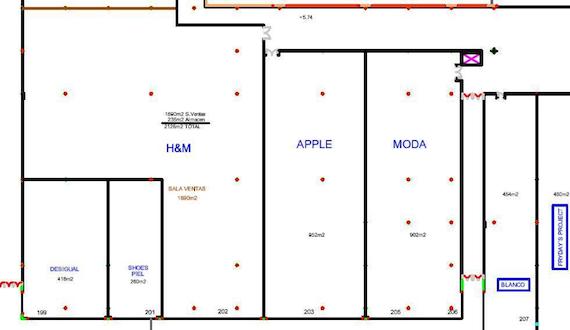 The plane that has been accessed, dated January 2013, shows the upper floor of the Shopping Center. As seen in the image above the local 203 a surface Sqm 925, indicates that the business will belong to APPLE And this is what has caused the stir. The name does not specify anything, since it could also be a Premium Reseller, although Granada already has 2 stores from the authorized distributor of Apple products, RosselliMac. Confirmation would still be missing as to whether it would not be a new store for the firm.

Granada is a city that has a population of approximately 250.000 inhabitants, below the population of cities such as Murcia, Valencia or Valladolid that already have an Apple Store, but the surface area of ​​this premises, 925 m2, is greater than those of these physical company stores, with 891 m2 the surface area of the Apple Store in Murcia, 750 m2 in Valladolid and 700 m2 in Valencia.

It seems strange that Apple already has its name on a plane given the top secret it has when opening a new store, as soon as we look at the numerous rumors until an official confirmation from the store Puerta del Sol in Madrid, still under construction. But it is certainly a news that filled with illusion to users of the company's products who want a store in the city.

Any reader who has more information about it?