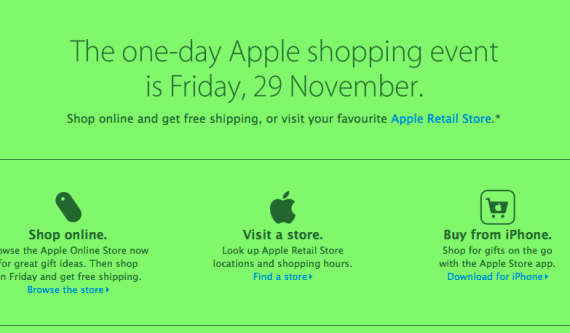 [Update]: Apple has sent a statement a few moments ago stating that in Spain Black Friday will take place on November 29.

Apple confirmed yesterday that will perform its classic «black friday» in the United States on November 29. In Spain it has not yet issued any signs that it is going to carry it out but it is quite doubtful that the Cupertino company will not carry it out considering that it has been applying this tradition in our country for several years.

For those who do not know, "Black Friday" is a day in which a large part of Apple products (or any store that adheres to this system) they arrive with succulent discounts.  Generally iPhone is not included in this promotion but the iPad, iPod and the entire line of Macs usually present some discount on these dates. Discounts in particular tend to be around 10%.

In this way you can buy a Mac for about 100 euros less or an iPad for about 40 euros less. They are not usually very big discounts and the truth is that often the discount for students that takes place all year round is higher but there it is for those who want to take advantage of it. It is also worth mentioning that Apple's refurbished products also usually apply this kind of discounts, but even more so that it is important to see that there are many moments where one can get the same discounts.

"Black Friday" will take place in both physical Apple stores as on the website. The website is usually active from midnight on Sunday until the next midnight and you avoid long lines.