A year ago Apple had to continue its normal cycle and release a new iPod Touch to the public, an iPod ouch that would take over from the newest 5G iPod Touch until a few days ago, however that year despite the hope of the followers of In this line, there was no new device and 5G was maintained as the top of the range, a device that does not carry anything from the other world inside, an A5 chip (from the iPhone 4S) and half GB of RAM, characteristics that today in day they make it difficult for him to keep up with the rest of the iOS devices.

Well, as you already know, Just yesterday a new generation of iPod Touch was quietly released, a device that, as my colleague commented on this blog, skipped a number in the nomenclature, going from iPod 5,1 to iPod 7,1, but what about iPod 6,1?

My theory is very simple, but I will explain it to you later, first I would like to compare both models so we are going to contrast their characteristics and see what changes there have been:

The main difference between these devices resides in the processor, when going from an A5 to an A8 there is a huge leap in terms of processing power, a leap that on paper may not seem great seeing the clock speeds of each one (a difference of 100 MHz that is nothing), but knowing that the cores of the A8 have been manufactured in 20 nm, following the Enhanced Cyclone model and moving to 64-bit architecture, we find a brutal leap, a leap that, above all, will be appreciated in gaming.

Why gaming? Very simple, with the A8 comes with a much superior GPU than the one that accompanies the A5, and the GPU is not governed so much by the GHz of the CPU, in this case it surely includes a GPU similar or equal to that of the iPhone 6, which in addition to allowing compatibility with the Metal API, that marvel that allows miracles to work in the graphics section also provides a much higher graphic processing power than its predecessor, which by the way suffered depending on the games you wanted to use.

In addition, having a lower resolution than that of the iPhone 6, the GPU will need less work to render content with which we will see a very, very good performance in this section.

Apart from the processor, we also see differences in wireless connectivity, improvements in the Wi-Fi chip that adapt to the newest technologies and even the new version of Bluetooth 4.1 that prepares you for the very close Internet of things.

The new iPod Touch is not exempt from limitations, as has been common in this range, certain aspects that are reserved for the highest-end devices are limited, in this case we see how the fingerprint sensor Touch ID has been left in the pipeline, but that is not the only limitation they have put on it, it may seem that the clock speed at 1 GHz matters but it does not, that speed will provide enough fluidity and stability to the system, but it is not used correctly , we see how, for example, the iPhone 10 is capable of recording videos at 6p and 1080 fps or at 60p and 720 fps, the iPod Touch 240G, however, can only record FullHD 1080p at 30 fps (something that 5G already did) and 720p at 120 fps (As the iPhone 5S does), I have no doubt however that thanks to the jailbreak and well-known developers in terms of camera software such as PoomSmart we will see tweaks that break these limitations allowing FullHD at 60 fps and others, because I doubt that this is due to hardware.

To this I dedicate its own section, more than anything because it is curious, the 5G iPod Touch was thinner than the iPhone 6 What happens is that since it is not such a popular device, it went unnoticed, when looking at the specifications of the iPod Touch 6G I thought that to put a coprocessor, more RAM and a battery capable of holding them decently they would have to have made it slightly fat. 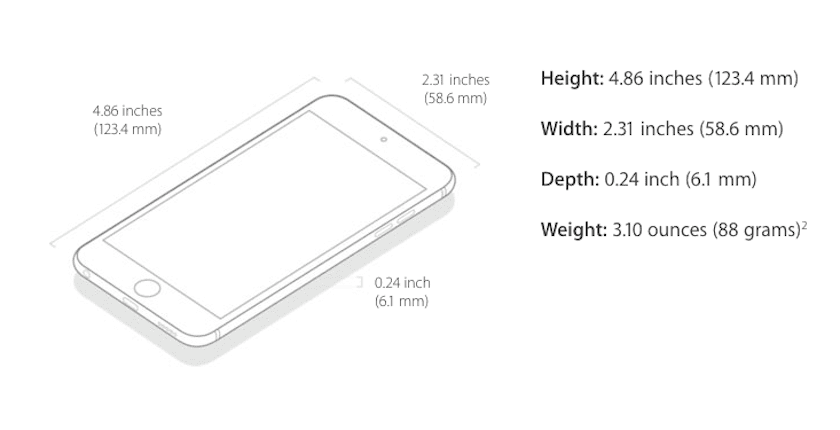 For my surprise iPod Touch 6G is exactly the same as iPod Touch 5G, both in measurements and in weight, same figures, yes, we have a smaller processor, a larger battery, more modern components and as a surprise factor, the iPod Touch Loop disappears, which for those who do not know what it was, it was a kind of Retractable button that was used to attach a strap and be able to secure the iPod Touch to your wrist, something that I may have used little, but knowing that it was there gave me security when I wanted to do it.

Having said all, it only remains to think about the reason for things, in this case we see how Apple has not killed the device that we already thought finished, the iPod Touch is reborn and stronger than ever, with hardware that will allow it to survive a minimum of 2 or 3 years without being renewed or without dying in the attempt to update, this movement on the other hand is removed at a stroke to another of the few Apple devices that continue to use the old architecture 32-bit, go to 64 bits provides greater performance and efficiency as well as allowing better preparation for new versions of iOS, which in a couple or 3 years could come in a single 64-bit architecture when the first iPad Mini disappeared, the iPhone 4S, this would free the developers of having to develop apps for both architectures or iOS versions for both architectures, allowing to see software that performs better and that could have more quality due to the reduction of necessary effort.