Waiting for the Apple Watch Series 8 to come out in September and to know if it brings the new sensor of body temperature measurement, The rest of the sensors that this device brings mean that on our wrist we carry a small computer, an assistant and a lifesaver. Taking into account that it was created as an extension of the iPhone and now we see it as a gadget that can help its user in very difficult and sometimes serious situations. There are four ways that an Apple Watch can save us and we are going to tell you right now.

Talking about the Apple Watch is talking about a device with incredible functions and an abysmal projection. We started out having a watch that only marked our messages and little else, so that right now we can have a device on our wrist that, at least in the US, is being used by doctors to remotely control the health of some patients. Numerous are the news of how the watch has saved the life of this or that other person and in many different ways. In fact, there are four factors or parameters that the watch continuously measures and If something goes wrong, he will get to work. They are: 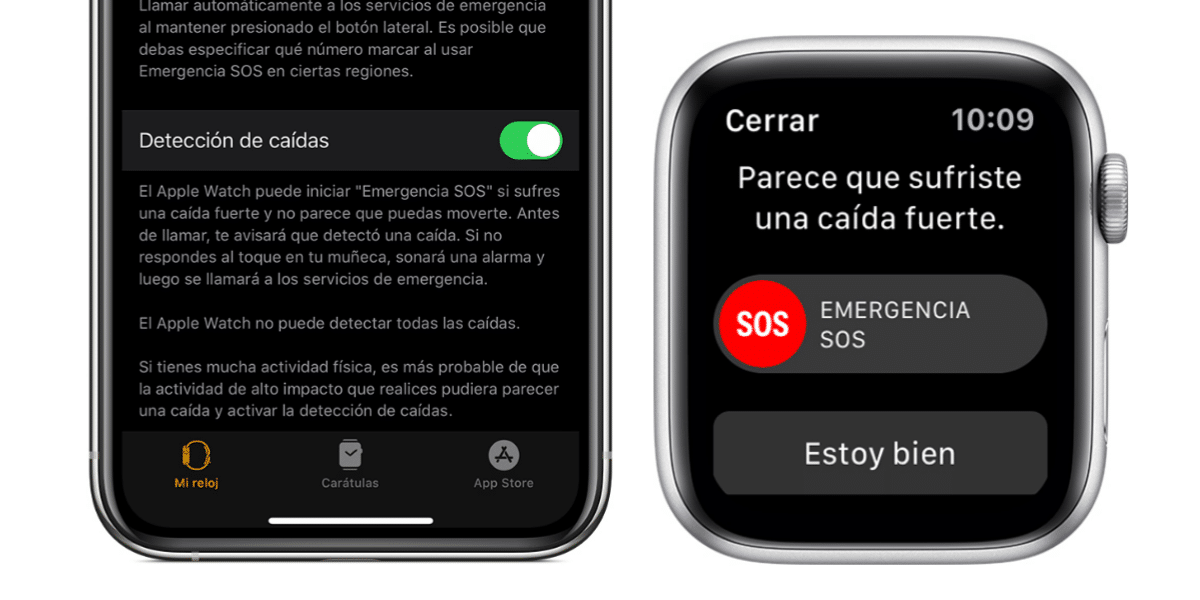 The Apple Watch has sensors that They detect that the user has suffered a blow and has fallen. This under normal conditions may not be dangerous, but in others, the user may be lying on the ground unconscious or trapped without being able to request the necessary help. This happened, for example, to a Nebraska farmer who, at the age of 92, fell from the stairs he was working on. The clock detected that fall and automatically, since the user could not cancel the warning, it sent a distress signal to the numbers programmed in advance. That and Siri were decisive for the communication to be fluid and the emergency services could save him.

The function de fall detection is available in the model SE and from Series 4. If a fall is detected, the watch sounds an alarm and displays an alert. We can choose to contact the emergency services or ignore the alert message by pressing the Digital Crown, touching Close in the upper left corner or selecting "I'm fine". As easy as, open the Apple Watch app on iPhone–>My Watch–>SOS–>Turn Fall Detection on or off. If fall detection is activated, we can choose between “Always active or Only during training”.

Perhaps one of the most special functions of the Apple Watch is this. The ability to measure automatically and regularly during the day, in the background, the user's heart rate. In this way, if you find any strange sign, we will be notified with a message. One of the measurements it makes is the maximum and minimum heart rate. If it exceeds the thresholds, something is wrong and it will notify you.

That happened to Keith Simpson who, feeling ill, used his recently purchased Apple Watch and warned him that your heart rate was abnormally low and that he should seek medical help. In the hospital they removed several blood clots that probably would have led to a fatal outcome.

Our heart rate notifications can be activated when the app Freq. cardiac se open for the first time on Apple Watch, or from iPhone at any other time. For that:

On the iPhone, we open the Apple Watch app–>My Watch–>Heart–>Freq. card. and choose a value for BPM (beats per minute)–>Tap Freq. card. Scroll down and choose a BPM value.

Siri and the water resistance of the Apple Watch

Thanks to the power capacity activate siri Only with voice commands and even raising the wrist and bringing the watch closer to the face, we can communicate with whoever we want or send a message, or any other function that comes to mind. We normally use it to write something down or create a new appointment in the calendar. However, we can use it for much more. That happened to William Rogers was skating on the Salmon Falls river when he fell into the freezing water. With Siri and thanks to the ability to work in extreme conditions, He was able to call the emergency services and they could rescue him.

By the way, if you usually bathe with it, don't forget that later it's a good idea expel any water that may have remained.

Another of the functions that the Apple Watch has in the heart section is the ability to measure the heart rate. We have the option of an electrocardiogram, but on a regular basis and several times a day, it measures our rhythm. If the watch detects that something is wrong, it tells us. If the rhythm is not sinus, that is, between 60 and 100 beats per minute, we could find ourselves facing an ailment. Ignoring it is not a good idea.

Do like Chris Mint, that upon receiving warnings of possible atrial fibrillation by Appel Watch, he went to the doctor and was diagnosed with two heart valves that were not working properly. This saved him from a heart attack or worse.

It seems that it is a good option, because it is no longer just something that tells us the time. It is a true assistant and it takes care of us day by day with its measurements and sensors. We hope that the Series 8 incorporates the body health sensor, very useful in many cases and that it will be complemented by the other sensors, giving more precise readings for each of them.

Full path to article: IPhone news » Apple products » Apple Watch » The four ways an Apple Watch can save your life